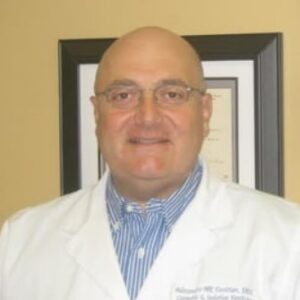 16 REVIEWS
0 BEFORE & AFTER PHOTOS

Not to be impolite, but whoever left the one-star review below is ridiculously off-base. Dr. Tavitian has been my dentist for years now and I frequently recommend him to friends in the area. He and his staff are compassionate and friendly with a terrific bed-side manner; he’s thorough and knowledgeable, but also incredibly fair in trying to find solutions that save his patients money and time wherever possible. He’s also an outside-the-box thinker. My wife was having severe headaches and occasional numbness in her fingers — which she casually mentioned during one of her visits. After a quick exam, Dr. Tavitian referred her to a specialist for TMJ treatment which completely changed her quality of life. Can’t say enough positive things about Dr. Tavitian and his staff.

I’ve had so much work done by Dr. Tavitian and he continues to be incredible. He actually cares about his patients and checks up on you constantly. He’s the greatest and Jenny is fantastic. Best. Dentist. Ever.

Dr. Alex has been my dentist for the past 18 years and I couldn’t be happier! My visits are always pleasant with Jenny’s warm smile as I walk in the door to Dr. Alex’s diligent and attentive care! I appreciate the questions Dr. Alex asks to make sure I’m informed about my health and takes the time to explain my needs and options as a patient. I’ve always been able to make the appt at a time convenient for me and rescheduled with most trouble as needed. My sister also switched to Dr. Alex and is equally happy. Just made another referral last week! Thank you for the fantastic care and customer service through the years Jenny and Dr. Alex!!!

I was very scared to go back to the dentist; after my wisdom teeth were removed at 16 (I’m 27) the feeling in my chin and gums on the right side didn’t come back. I choose Dr. Alex because of reviews on yelp, but not the typical way. I could tell other dentists (esp the one ranked 1 in burbank) were sending their patients over to yelp to write reviews, and asking them to “check in” before they write the review. That’s a red flag for me; I want a dentist less worried about social media and more worried about my teeth. Dr. Alex’s reviews were minimal but great, and his website very professional. I made the right decision. The office is cozy and beautiful, and his office staff (I can’t remember their names, I’m sorry girls!) were friendly and knowledgable. I need a new word to describe his bedside manner — he was exemplary. Friendly, so patient, and explained things to me in a way I could understand. He cleaned my teeth personally, and it was pain-free. I don’t have insurance; the cost was fair. I am getting the zoom whitening from him next week, along with the take home trays for maintenance like he suggested. The normal price for the trays is $325 alone, and the zoom $300, but they have an awesome deal right now where I am getting both the zoom whitening AND the trays for $325! Amazing! I’ll update after my whitening, but I expect it will be nothing but the best.

Dr. Tavitian is the best. I hate going to the dentist, but Dr. Tavitian and his team (I’m talking about you, Jenny!) are the best! My teeth and anxiety appreciate Dr. T equally. As an added bonus, he is a total bad-ass and will talk to you about motorcycles and his international travels!

Alex and jenny are AWESOME!!! Jenny got me in same day to look at my emergency wisdom tooth that reared its ugly little head out of nowhere. I’m in pain and her and Alex really took care of me! My consultation was really quick–in and out in maybe 20 mins? And Dr Alex saw me himself and was so nice and honest about my wisdom tooth extraction. I ended up having to get a referral to an oral surgeon, but I’m so happy and excited that I found Dr Alex! Finally have a great (and honest!) dentist again!!!

Dr. Alex has been my husband’s dentist for many years. I normally go to a dentist in Malibu where I work. But when I needed a crown to mend a broken molar, my Malibu dentist became too expensive. So I decided to explore other options. Dr. Alex is very highly recommended by my husband. That, plus the fact that he was charging 1/3 the cost of the crown compared to my other dentist, convinced me to go to Dr. Alex. I had a good experience and pain was minimal. He checked with me each time he did any step, he would tell me exactly what he was doing and what to expect. Dr. Alex was very kind to me, and so was his assistant Jenny. There was no waiting, they attended to me promptly upon my arrival. My newly crowned molar feels as good as it can be. I highly recommend Dr. Alex!

Great experience! The staff is friendly and caring. Dr Alex constantly asks me if Im ok during my procedures. Then a couple of days after my appt he texts me to follow up and see how im doing. He is gentle, professional and experienced as I did NOT feel ANY pain!!! I have ALWAYS been terrified of dentists, endodontists etc…..Not any more….  Thank you Dr Alex!

Dr. Alex has been working on ,y teeth for many years. I used to work at a dental office & continued to see Dr Alex rather than the office I was working at. He is very personable & makes every patient feel like they are his personal friend. He has done an excellent job on my teeth & I tell all of my friends to go see him. His office has great Tvs where you can see your own Xrays. He also has Sirius Satelite radio & headphones so you can pick which channel you want to listen to while he is working on your teeth.  His office assistant, Jenny has been with him for many years and has been helpful with billing my insurance & helping with my payment plans. Dr. Alex is the best!

Dr Tavitian and his staff are some of the best professionals that I had the honor to be helped by. He repaired and redid one of my bridges which was a chronic problem. Now it feels like it is my natural teeth. Thank you Doctor and Jenny for excellent service and treatment.

I highly recommend going to Alex Tavitian’s office. He is such a kind man and his assistant Jennie is amazing! I hate getting x-rays on my teeth but Jennie moves quickly and gets me through it the best that she can. Dr. Tavitian is fast but thorough. He will stop and talk about what he sees. He is such a great Dentist. He always asks how the family is and genuinely wants to know how my kids are and what they are up to

The receptionist Jenni is very welcoming and super friendly! Dr. Alex is amazing he has the best bedside manner and makes you feel so comfortable! His assistants are very helpful and nice! He totally make my teeth nice a clean super fresh! I love smiling thanks to his office! He has the newest technology for dental work and his dental center is very clean and elegant! I totally recommend him for a dentist!

Dr. Alex and Jenny are the most amazing health care practitioners I’ve ever met!  I have severe dental phobia, and this team always manages to treat me gently, so I suffer no fear or pain.  Dr. Alex’s work stands the test of time, too.  I have a bridge and fillings still going strong after over 10 years of use. Exceptional dentistry.

Best dentist in Burbank. My husband and I had bad experiences with Bright Now Dental and were both having a hard time finding a trusted dentist . Dr Alex was referred to me by my coworker. Jenni the receptionist is so nice and helps you work with your insurance copays . Dr Alex takes the time to discuss all the options with you and never pressures you. My husband and I are so impressed by him and his staff we trust them completely. We have also recommend him to several of our friends and coworkers and they too are happy patients of Dr Alex.

Dr. Alex has been my dentist for many years, and thankfully I found him after several really bad dentists in this city. He does the cleanings himself as well as procedures. He doesn’t overlook anything that needs to be done, and he is very honest about what he can and cannot do to help. Additionally, he is a wonderful person with a great personality. Jenny works in the office with him and does x-rays, reception and helps out with procedures. She has been with him for years, which says a lot. I highly recommend Dr. Tavitian.

Dr. Alex is everything you could ever want in a doctor. I’ve had several major procedures done at his office over the last few years and have always been thrilled with the care I’ve received. He and Jennie are the best!

As your dentist you can rest assured that you'll receive the personalized attention you deserve. I will listen to your needs and answer all your questions. You'll receive a complete and thorough exam, including oral cancer and gum disease exams, at no additional charge. Plus, you'll enjoy our friendly, caring, and highly trained team. You'll love the personal attention we give to your comfort. We avoid any last minute surprises to keep your experience in our office pleasant and relaxed.